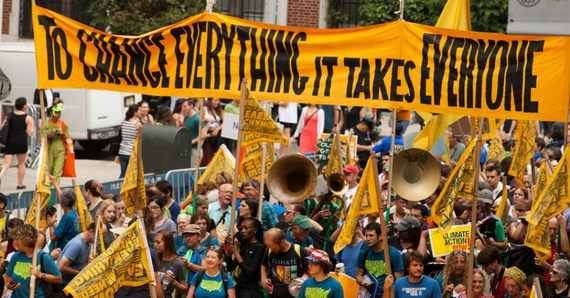 The Spirituality of Activism & the End of Neutrality

Too many people still think of spirituality as neutral. There is nothing neutral about it. Spirituality is a fight to bring Oneness to a shattered soul and a shattered world. For many of us the symbol of neutral spirituality is the Buddha releasing attachments. But the Buddha was not neutral. He was fighting for Oneness on this planet, and he never shrank from that fight. In my view, the attachments he guided us to release were the attachments to the egoic desires of the world, not the passion for justice, love and Oneness.

Why do we have the idea that spirituality looks like a passive acceptance of "God's will"? That idea has two roots. One root is the teachings of churches and other religious organizations who are trying to imbue into believers an ethic of resignation. The purpose of this ethic is to prevent us from rebelling against the anti-Oneness ideology inherent in so many religious teachings, such as: This is the only path to God; God is perfect and we are sinful; Non-believers are evil; and so on. In addition, the ethic of resignation is meant to discourage us from rebelling against the corruption inherent in so many hierarchical structures: the caste system in Hinduism or the requirement to obey people because of their title or position (cardinals, ministers, rabbis and Mother Superiors, for example). We are taught to acquiesce and obey these authority figures, which actually serves only to perpetuate the hierarchies that promote them, from the king to the priest.

The "spiritual" rationalization for obedience and acquiescence is that they represent surrender to God's will. But clearly obedience to mindless doctrine and acquiescence to exploitation and oppression have no connection to God or spirituality. On the contrary, they simply perpetuate the material and social power of elites - individuals and groups. Religious doctrine may be based on hierarchy and exploitation, but spirituality is not. Spirituality is based on Oneness and equality, as we have seen expressed by every major spiritual teacher who has blessed our planet. The direct connection to the universal energies, or God, is in essence democratic because each human has access to those energies, just as we all have access to the sun. Thus straight, gay, murderer or saint, we can all access the Divine and we are transformed by it. And that is because we are One with God and one another.

The second root of the belief we should passively accept God's will is connected to the egoic version of spirituality, which is what virtually all of us have been taught. "I" am separate from you and my spiritual quest is separate and personal as well. In this paradigm, seeking my enlightenment, not revolutionizing our world, is the hallmark of a spiritual life. God has created the world, and I can busily indulge myself in a spiritual quest for my own enlightenment, which allows me to overcome negative feelings about God's creation and float off in a haze of gratitude and acceptance. I don't change things. I accept them. And that makes me enlightened.

In this scenario, I do not have to be concerned with the well-being of the whole, either spiritually or materially, because I'm only seeking my enlightenment. This is self-indulgence in the name of God. Separation and self-indulgence were never the intention of our spiritual masters who gave themselves over to sacrificing ego for the common good. Again, the essence of spirituality is Oneness and connection. No one who has entered into the mind of God can believe or perpetuate the myth that we are separate beings on a path of personal enlightenment and fulfillment when the opposite is the case. Why would the guru or the Bodhisattva dedicate him or herself to alleviate needless suffering in the world if he or she truly believed in the pre-eminence of his own journey? On the contrary, he or she touched by Buddha consciousness relinquishes the goal of personal salvation for the goal of raising and healing the whole. The Dalai Lama is a living example.

When we focus on a spirituality based on only personal and egoic ambitions for enlightenment or happiness, that focus serves only the powers-that-be, because our chasing spiritual ambition takes us out of the fight for social justice. And if we are truly One, then personal salvation is a contradiction in terms, because only the transformation of the collective human heart and consciousness can change the individual, just as our individual struggles impact the collective itself, because we are One.

Spiritual Activism Is Oneness in Action

Spiritual activism requires us to fight, but to fight with a higher consciousness, which calls us to act for the highest good of all. And yes, that is a fight with a difference. For example, we must attempt to stop the behaviors of harmful individuals, corporations, the greedy or corrupt, but we must acknowledge that those qualities exist everywhere and in virtually all of us. If we only blame, we have betrayed Oneness itself. We must always be alert to our own desire to separate and to pander to our narrow interests and our prejudices. We must call out everyone on separation and discrimination, including ourselves. And we must stand up with power and conviction.

The fight of a spiritual activist can look different under different circumstances, but always it has a single core. Spiritual activism is the fight for Oneness, and that inspiration is the guiding light of our lives. And on that, there can be no neutrality.